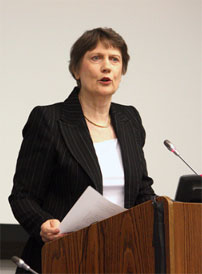 We’ve Heard of Her

Former prime minister Helen Clark, who is now administrator for the United Nations Development Program (UNDP), has topped a list of 25 women in a Foreign Policy magazine article called, “The most powerful women you’ve never heard of”. “The Angela Merkels and Dilma Rousseffs get all the attention. But they’re not the only female leaders running the world. As prime minister, Clark oversaw a decade of economic growth and won three straight terms in her post after a long career as a Labour Party legislator and cabinet minister. Since 2009, she has led the UNDP, the arm of the United Nations charged with confronting the world’s worst problems, from global poverty to corrupt governance to health and environmental crises. Clark, 62, now oversees the UNDP’s nearly $5 billion annual budget and more than 8000 employees operating in 177 countries.