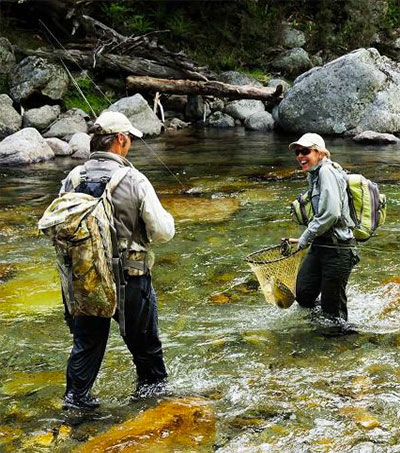 Owen River Lodge is about 100km from Nelson and its owner, Felix Borenstein, says Wairau River is fly-fishing’s Everest.

One minute they are there and the next they aren’t – three of the biggest brown trout imaginable cruising the aquamarine waters of a deep pool in Wairau River. One is at least 12lb (5.4kg, but fly-fishing weights and lengths are measured in the imperial system) and the others not far behind. All are feeding close to the surface and thus, in theory, are catchable.

“It’s the pinnacle of brown trout fishing in the world,” Borenstein says back at the lodge over a glass of riesling from the local Neudorf Vineyards. “We don’t have big numbers of fish, but those we do have are as big as you’ll find.”

Borenstein is a former tech mogul who ran a successful recruitment business, and says he came to fly-fishing after a friend bought him a trip as a way of suggesting he chill out. Borenstein soon went from a workaholic to a wannabe trout bum – a dream that became reality when a rival firm made an offer for his company in 2002. “I had day-dreamed about opening a fishing lodge. I was 42 and I thought if I don’t do it now I never will.”

He had already zeroed in on the Murchison area in the north of the South Island, a site chosen for its variety of rivers, proportion of big fish and reputation for the sunny spells that are essential for this type of fishing. “I was shell-shocked for the first two years,” he admits, “but I absolutely adore it. I pinch myself many days. It is just fantastic.”