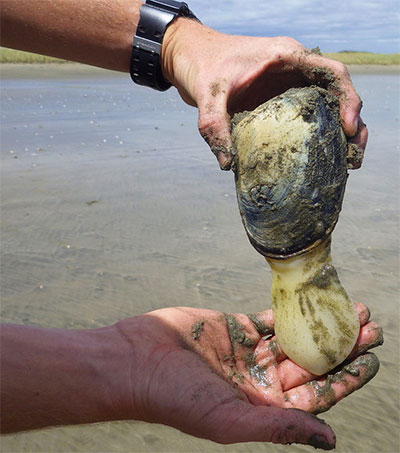 People talk about toheroa like they’re a dream, because these days, they are, Naomi Arnold writes for travel site, Atlas Obscura. The big, delicious surf clams were once plentiful on New Zealand shorelines, before populations suffered a mysterious, catastrophic crash in the second half of the 20th century. Those old enough to have seen the last-ever toheroa season are full of memories. Arnold investigates the disappearance of New Zealand’s “iconic clam”.

Toheroa bury themselves in the sand using their fleshy tongues, which can approach the size of a human’s. They were fast enough, Raglan’s Tracey Cooper tells the Atlas Obscura contributor, that by the time you’d spotted their two tell-tale siphon holes on the low-tide sand flats, it was nearly too late to dig for them.

“They might be a foot deep but by the time you’ve dug that deep, they’re even deeper,” Cooper says. Their elusive strength was immortalised in a popular children’s song recorded in 1979 – the peppy Toheroa Twist.

Found mostly on west and south-facing New Zealand surf beaches, toheroa (Paphies ventricosa) remain both a traditional food staple and taonga, or treasure, for Māori. But they became an everyman’s luxury in the early-20th century. Rich, sweet, gamey, yet creamy, the flavour was fine enough to also appeal to the epicurean. A 1936 issue of the New Zealand Railways Magazine described them as “now firmly established as a delicacy highly esteemed by the most fastidious gourmet”.

Pale green toheroa soup was also a specialty, described as “like clam chowder, but better”, according to a 1925 advertisement in the Auckland Star. One vintage recipe book lists toheroa soup under “Native Delicacies”. It required a dozen toheroa minced, simmered with onion, water or stock, milk, cinnamon, flour, and parsley.

They’re nearly all gone now. The harvesting seasons, the canneries, the soup, the recipes. Commercial harvest stopped by 1969, and regional recreational fisheries closed between 1971 and 1980. Some toheroa are still around, but it’s forbidden to take them. Māori retain customary take, largely for hui or tangi; providing toheroa to visitors is an important component of manaakitanga. They can also grant permits for particular occasions.

But if the fishery has been closed for that long, why haven’t the toheroa returned?

The list of potential causes is long; the reasons for toheroa’s failure to recover are still largely uncertain.

New Zealand has faced fishery collapses before, most notably of scallops. But while toheroa may be largely gone, they shouldn’t be forgotten. They should be a cautionary tale, illustrating the destructive effects of rampant culinary enthusiasm, ignorance of how land use affects the ocean, overwhelming commercial interest, and pure greed – all of which run roughshod over Māori tikanga, or cultural practices, that traditionally protect food sources from extinction.