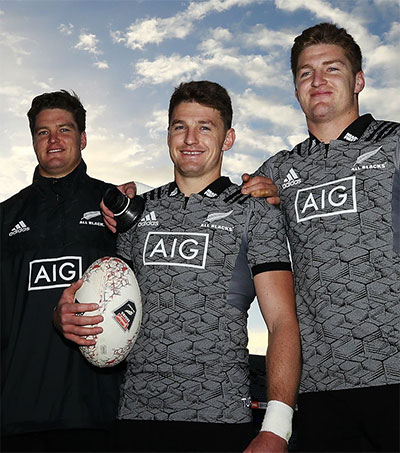 Running around frost-covered coastal Taranaki fields in their bare feet was indicative of the sort of grounded upbringing that former captain Richie McCaw believes helped the three Barrett brothers – twice World Player of the Year Beauden, 27, fullback Jordie, 21, and lock Scott, 25 – make it as All Blacks.

The trio created history last June when they all started a test against France at Eden Park and all three look likely to be in the World Cup squad later this year.

McCaw, who grew up on a farm and is no stranger to running around on frosty mornings himself, said it was the willingness of the three to just go that bit further and put themselves under pressure that helped earn them the famous black shirt.

“It’s often the character, when the heat comes on, whether you’re prepared to do all those extra little things, sometimes you can’t teach that,” the captain of the 2011 and 2015 World Cup winning sides told CNN’s World Rugby.

“Those boys have got all that from their upbringing, but they work extremely hard and they’re grounded.

“The recognition hasn’t gone to their head, they just keep doing their bit for the team, which I guess is the ethos of what New Zealand rugby is all about.”

The trio’s elevation to the national side may not have been a huge surprise to their father Kevin, a former Wellington Hurricanes and Taranaki lock, who famously quipped when he retired that he was “going to go breed some All Blacks”.

The brothers were raised with five other siblings, inheriting their size from their father and speed from their mother Robyn – a talented basketball and netball player.