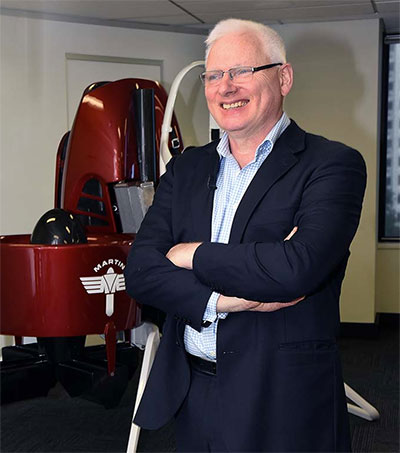 Turn off Your TVs and Get Rich Urges Glenn Martin

New Zealand inventor Glenn Martin, 55, sold his television to rid himself of distractions in his drive to create one of the world’s first human-controlled jetpacks.

Thirty years on from that decision and prototypes of his original invention will be put through their paces before US homeland security and defence departments showcasing their potential use in search and rescue, natural disaster recovery and in security surveillance.

Martin, who is in Adelaide this week, has this advice to budding entrepreneurs.

“If I wasn’t working on or discussing something to do with jetpacks, it wasn’t important,” he says.

Martin, whose human-controlled jetpack, named by TIME in 2010 as one of the world’s top inventions, will be keynote speaker at The UnConvention event.

At The UnConvention Martin will talk about his experiences, first making kayaks as a 12-year-old. A decade later he was laying out the mathematical foundation for his jetpack.

He no longer has a day-to-day role at Martin Aircraft. Earlier this year he parted with 38 million shares, worth in excess of AU$25 million at today’s value. Around this time Martin issued a blunt statement to those tasked with continuing his legacy: “Deliver the dream that people want, not the product that is easiest to build. Now don’t f … it up!”