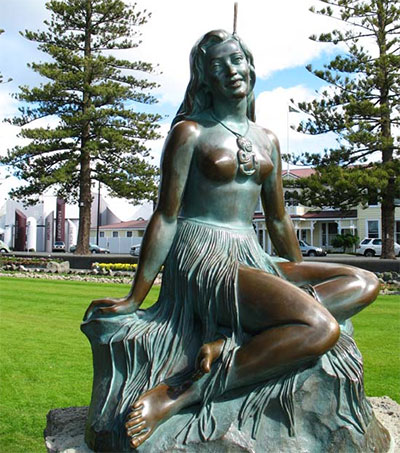 Pania of the Reef a Story to Travel

“About 85 per cent of New Zealand’s Maori population live on the country’s North Island, and visitors who want to learn more about the culture of the country’s indigenous people don’t have to look far,” according to Toronto Sun journalist Ian Robertson.

“On a previous visit to the island’s east coast, I learned about a local legend and had a traditional lunch on a Maori waka.

“In Napier many people take a stroll along the promenade facing Hawke’s Bay and stop to admire Pania of the Reef.

“Like many Maori legends, the lifesize bronze statue captures the essence of stories passed down since the indigenous Polynesian people arrived in New Zealand more than 1200 years ago.

“After being lured by the siren voices of the ‘Sea People,’ the beautiful Maori maiden Pania swam out to meet them and was transformed. Pania later secretly married Karitoki, the son of a Maori chief, but warned him she must answer the siren’s call each morning and return to the sea until evening, when they could be reunited for the night.

“One morning – as the story goes – Karitoki tried to prevent Pania from returning to the sea, but the sirens pulled her beneath the water’s surface and she was transformed into the reef that remains beyond the city’s breakwater.

“Pania of the Reef has stood in the lush gardens beside the Marine Parade highway since 1954, with the exception of a brief lapse in late 2005, when the statue was stolen. Later recovered and restored to her place of honour, Pania still attracts a large number of visitors each year.

“And who knows, maybe they, too, have heard the sirens calling from the nearby surf. Just imagine!”