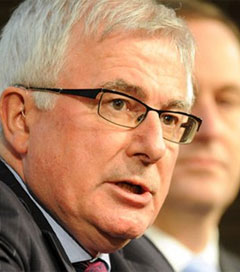 London bookies Ladbrokes have named Tim Groser, New Zealand’s Trade Minister, ‘joint favourite’ to be the World Trade Organisation’s (WTO) new Director-General. Mr Groser is at 3:1 to take out the top job, along with Costa Rica’s Trade Minister. With nine contenders, “this is the most crowded field ever assembled to take on the top job. Mr Groser is thought to be favoured among developed nations, but countries like India are believed to be pushing for someone from an emerging economy as the balance of global financial power shifts, “according to Britain’s The Independent. A successor to Pascal Lamy, the incumbent, must be chosen by May 2013.