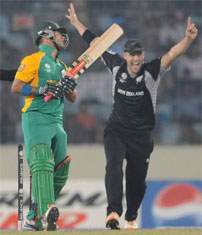 The Black Caps head into the semifinals of the World Cup after beating South Africa by 49 runs at Shere Bangla National Stadium in Dhaka. Man-of-the-match Jacob Oram took two brilliant catches and captured four for 39 with his naggingly accurate medium pace after the South Africans appeared to be cruising to victory in pursuit of a modest victory target of 222. “We’ve got a talented bunch of players but unfortunately we are also inconsistent”, Oram said at the victory presentation. But I’ve never been prouder to be in that dressing room and have a silver fern on, considering we were written off before this game.” New Zealand will meet either England or Sri Lanka in Colombo on March 29.