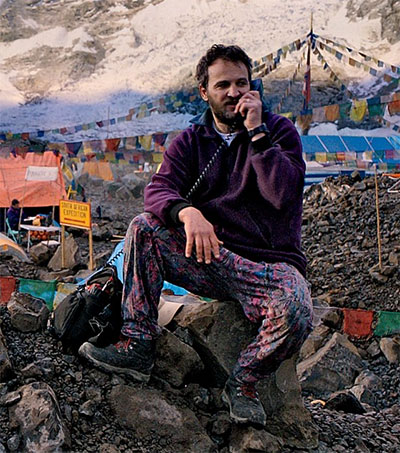 It’s been almost two decades since the infamous 1996 tragedy on Mount Everest in which New Zealand guide Rob Hall and seven others perished. The world’s highest mountain has seen more destructive seasons – especially in the past two years. Does the catastrophe that gave us the 1997 book Into Thin Air still have the power to captivate?

The saga of the rescue attempts and of the eight people who died that day would become one of the greatest stories in modern adventure history. Few moments in mountaineering lore are more heartrending than the final radio calls between Hall and his pregnant wife, Jan Arnold (played by Keira Knightley in Everest), back in New Zealand, during which, sensing her husband’s fate, she tried to coax him into descending.

Outside Magazine talks to the cast and crew of the new movie Everest about making an adventure epic roar to life for a new generation.

When the magazine meets the stars in Los Angeles, Jason Clarke (pictured, who plays Hall), Jake Gyllenhaal (American Scott Fischer), and Josh Brolin (Texas doctor Beck Weathers) were genuinely enthused to be together again, trading adventure stories like old friends reminiscing about an expedition. The actors had immersed themselves in the roles – training physically, interviewing the survivors, and speaking with the friends and families of the deceased. Clarke went trekking on New Zealand’s Tasman Glacier, a common stomping ground for Hall, and spent hours talking with Hall’s wife.

Producing the US$55 million feature film, which opens in the United States on 18 September, was an adventure in itself. Much of it was shot on location in Nepal and Val Senales, a ski resort in Italy’s Dolomites. Longtime Everest guides David Breashears, Guy Cotter, and David Morton were on board to provide mountain footage and consult about safety and climbing details. Some scenes in Nepal were filmed as high as 16,000ft, while in the Dolomites the cast and crew were airlifted by helicopter into avalanche-prone terrain. “This project attracted people of similar minds,” Gyllenhaal said. “You don’t just have actors sitting in their trailers. You have people who are physical and want to do some crazy shit.”