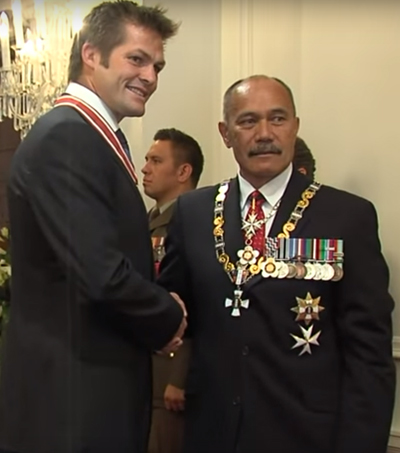 All Blacks legend Richie McCaw has received New Zealand’s top civil honor – the Order of New Zealand (ONZ), which recognizes “outstanding service” to the country and is restricted to 20 living members at any one time.

McCaw, who led New Zealand to back-to-back World Cups in 2011 and 2015 was pleased to keep the pomp and ceremony to a minimum.

“The fact that it didn’t come with the title of ‘Sir’ sat with me a lot more comfortably,” said McCaw, who becomes the youngest holder of the title.

“I just see myself as a ordinary boy from Kurow who has been able to live a dream,” said McCaw, as reported in Reuters.

McCaw said the honor ranks alongside the best of his stellar career.

“This would be right up at the top, you can’t get any bigger than this. To be recognized by your country, it’s pretty cool,” he said.

During his 15-year career, the flanker played a world record 148 tests and only tasted defeat 15 times.