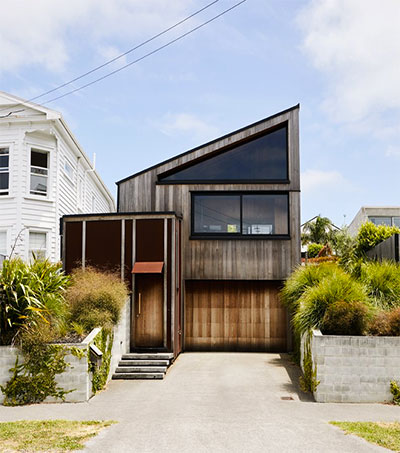 “Designed by [RTA Studio] architect Richard Naish for his own family, this Grey Lynn house “is not a single structure, but three separate two-story pavilions that march upward from the street along a gentle slope, connected by a stepped hall that ascends up one side,” Dwell magazine reports.

“Grey Lynn, an inner-city suburb in Auckland, is known for its steep terrain, tree-shaded streets, and late-19th-century timber villas, often clustered in groups of three or more by the same builder. Within this heritage residential zone now rises a newcomer: an angular, steel-roofed house that is radically different, yet subtly shares some of its neighbors’ DNA.

“‘Essentially, a villa is a square box with a four-sided pyramid roof,’ says Naish, founder of RTA Studio. ‘We sliced that into quarters and spread them out to give the house a familiar roofline that’s only slightly abstracted and repeats that cluster of three found in the area.’

“The pavilions each have a footprint of roughly 385 square feet and are separated by small courtyards and ‘garden rooms,’ allowing for both excellent solar gain in winter and ample cross-ventilation during the warmer months.

“The layout is the antithesis of an open plan. Instead, it offers individual spaces for Naish and his family – his wife, Andrea, and their three children ages 16, 14, and 10 – to find privacy. RTA Studio often explores what Naish calls ‘the distributed plan,’ pulling houses apart into smaller segments and taking advantage of New Zealand’s mild climate by creating interstitial outdoor spaces.

“The Naishes’ house is a prime example. The first courtyard lies between the kitchen, on the top floor of the lowest pavilion, and the living room, on the first floor of the middle one.”