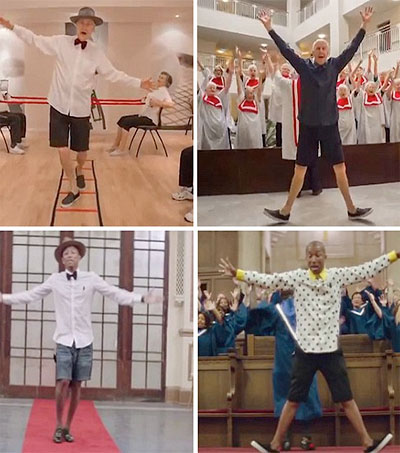 The residents of Diana Isaac Retirement Village in Christchurch have proven that despite any aching joints and stiff hips their dancing shoes are as good as new by creating their own version of Pharrell Williams’ hit song Happy.

The retirement village has received over a million views of their video clip, 80 Odd Years Of Happy, which mimics the moves and scenes created by Pharrell himself.

David King, a spokesperson for Ryman Health Care which manages the village, said the video was made to show resident’s children and grandchildren, exactly what their loved ones are made of.

The star of the video, complete with a Pharrell-esque smart white shirt, bow tie and iconic hat, is 79-year-old former engineer Alister Leckie who King said “had never done anything like that before, and absolutely loved it”.

King said residents frequently trained for and performed flash mobs in their local supermarkets as part of their exercise regime.

“We do flash mobs around the country at malls where the residents hide and we play the music and then they all come rushing in and start dancing,” he said.