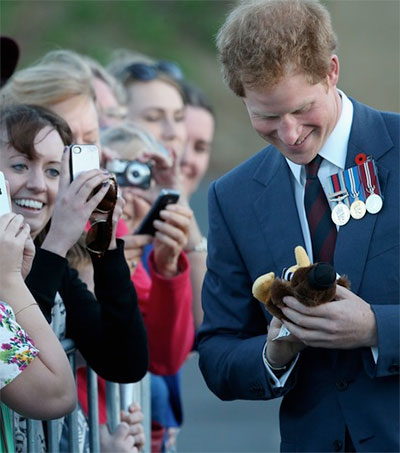 Prince Harry has been warmly welcomed throughout New Zealand on his first ever visit to the country after a month-long deployment with the Australian military.

Arriving in Wellington in a Royal New Zealand Air Force Boeing 757, the Prince was escorted to the Pukeahu National War Memorial in the centre of the capital, where he paid his respects and laid a fern at New Zealand’s Tomb of the Unknown Warrior, before accompanying Prime Minister John Key and his wife Bronagh to lay wreaths inside the memorial building as the Last Post sounded.

The 30-year-old Prince is a popular figure with many New Zealanders, who admire what they see as his independence of spirit.

The Prince spent his first evening in the capital at the Westpac Stadium, watching a Super Rugby Union clash between the city’s Hurricanes and South African rivals the Sharks.

The popularity of the monarchy is riding high in New Zealand, boosted after Prince William brought Kate and their infant son George to the country on a highly successful tour last year, and Prince Harry’s visit certainly built on that.

Original article by Paul Chapman, The Telegraph, May 9, 2015.