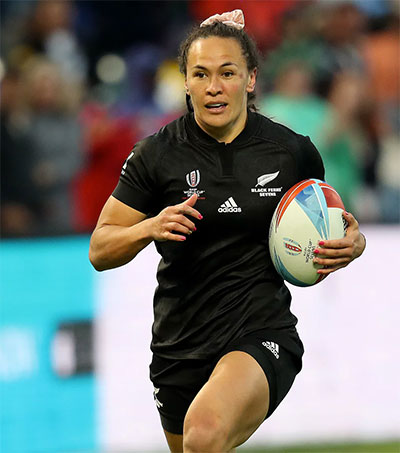 Black Ferns winger Portia Woodman, 27, has made the top 10 on a list of rugby union’s most influential people, ahead of any of her male All Blacks counterparts and two spots below All Blacks coach Steve Hansen. The list is published biannually by respected magazine Rugby World.

Auckland-born Woodman comes in at ninth on the list, as nominated by players, coaches, administrators, journalists and other important figures in the game worldwide.

The sevens star has enjoyed an excellent year for her country as the leading try-scorer in the Black Ferns’ successful tilt at the 2017 World Cup, and a member of the and gold-medal winning teams. The Black Ferns are now six-time world champions.

All Blacks Beauden Barrett (25) and captain Kieran Read (43) are the other New Zealand-based players to feature in the top 50. All up, there were 10 New Zealanders listed, including Raelene Castle (26), who now heads Rugby Australia and New Zealand Rugby chief executive Steve Tew (29).

Woodman was the highest-ranked woman to feature in the list, and one of five to feature overall.

“Ours is an ever-changing game and with the men’s Rugby World Cup in Japan in 2019 looming large and the 2020 Olympic Games in Tokyo hot on its heels, now is the perfect time to discuss how rugby is shaped,” Rugby World editor and CNN contributor Alan Dymock said.

“Portia Woodman’s place in the top 10 is owed not only to her sustained excellence on the field … but also due to her willingness to speak out publicly for the women’s game, challenging authorities on behalf of her fellow players.”

Woodman played netball for the Northern Mystics before switching to rugby union in 2012. She made her debut for the Black Ferns in 2013 against England.