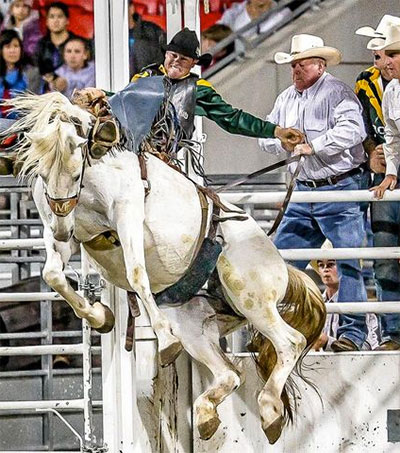 This week the Queensland Times caught up with the charismatic snapper to find out how a New Zealander, who was escorted out of the first rodeo he tried to photograph, made a name for himself in the equine industry.

Mowbray’s first taste of the rural lifestyle came from a stroke of good fortune.

“My sister and I lived in a children’s home in New Zealand. We were very fortunate that a couple, who didn’t have children at that time, came to the Anglican Social Services and said they had a sheep and cattle property and would like to take some children on a holiday so they could experience country life,” Mowbray said.

Colin and Pam Heslop’s property Glen Hope was nestled deep within the South Island off the Lewis Pass.

‘It was just an amazing place,” Mowbray said.

His preference of being an observer of equine events rather than a participant was cemented after he had a fright on a fast-paced horse.

“I was warming up a barrel horse and I went around the first barrel, the second barrel, then after the third the horse decided to come home quite a lot quicker than I wanted it to,” he said.

In 2013, Mowbray and his wife Vicki were left some inheritance money and, with Vicki’s encouragement, Stephen bought himself the equipment he needed to become a sports photographer.

These days, Mowbray can work 38 weekends out of a year as an official event photographer.

He has earned a reputation for quality work, and is deeply passionate about his industry.

“I take a hell of a lot of pride and care on how I present my work, for my reputation, but also for the riders,” he said.

Mowbray has also caddied on the Ladies European and Australasian Tours, and was on the bag for the first tournament win of fellow New Zealander, Lydia Ko.