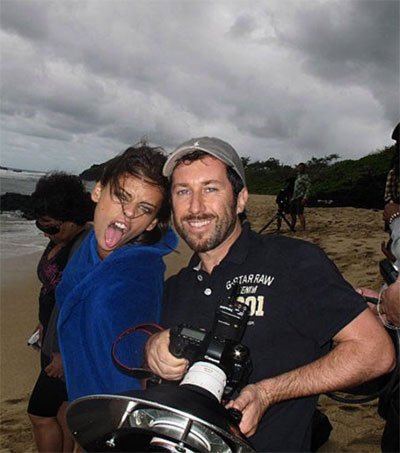 Earlier this year, 46-year-old Gavin O’Neill, who left New Zealand in 1996 to pursue fashion photography, received an email from the personal assistant of Kim Kardashian West.

She had found his work on Instagram, the email read. Would he be interested in photographing one of planet Earth’s most famous women for her forthcoming makeup line? Was he free two weeks from now? Jeremy Olds reports for Stuff.

“There was no mucking around at all,” O’Neill says. “It was all done and dusted before I had time to consider what a big deal it was. It was the ultimate thing to come from a little phone app.”

O’Neill is based in New York, where he has lived since 2011. During the last two decades he has built a portfolio bursting with work for fashion magazines (Vogue, Marie Claire, Cosmopolitan, GQ) and commercial clients (Gillette, Olay, L’Oreal).

Stepping foot on Planet Kardashian, though, was by far the biggest break of his career. By photographing Kim, O’Neill’s work was put before her 102 million Instagram followers. He’s encouraged by what the commission represents.

“She can choose whoever she wants in the world, and she chose me. That’s what I take most from the shoot – she has a lot of power, through social media, and it was a demonstration of her power. She actually chose me.”

O’Neill, who grew up in Nelson, is self-taught. He began shooting professionally in Perth in 1996 before moving to Europe in 2001.