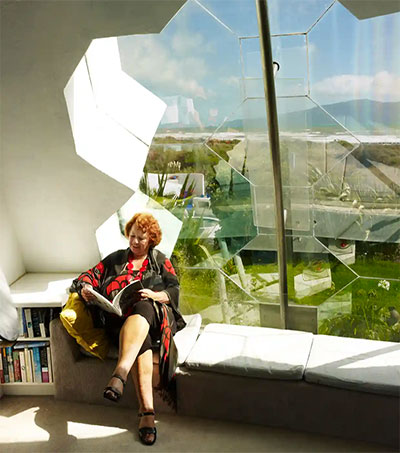 Friedrich “Fritz” and Helen Eisenhofer’s idiosyncratic dwelling, in the small hamlet of Peka Peka north of Wellington, is a prototype domestic biodome for what Fritz, a modernist architect who was trained at the Kunstakademie in Vienna, has called the Eco Home. Sameich Blatt reports on the architectural wonder for The Observer.

The couple’s work on their shared home began in the late 1980s. While they chose the site for its proximity to the sea, another major factor was that, being among the sand dunes, the terrain lent itself to their dream of creating an earth-sheltered, low-cost, energy-efficient house, Blatt writes for the UK newspaper.

The building is a series of sun-facing, faceted domes designed to store heat and conserve energy. Each was constructed with a thin shell of robust ferro-cement that contains the iron foundation that forms the skeleton of the structure.

“Over the years, I’ve studied energy conservation and underground development around the world,” Fritz says. “It’s a unique way of building and has very low material costs.”

Energy-efficient techniques of generating solar gain are common to many passive or sustainably designed buildings, and they have always been a key feature of Fritz’s architectural exploration.