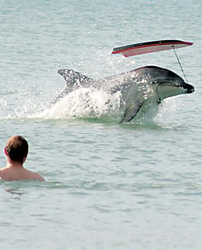 Moko the dolphin, who resided at Mahia Beach for two and a half years from 27 to September 29, has been included in a Time magazine Top 1 list of history’s most courageous animals. One day in the summer of 28, Moko showed up just in time to save two beached pygmy sperm whales. Successfully doing what humans could not, Moko seemed to communicate with the two whales and lead them safely back into deeper water. Had the dolphin not shown up, rescuers said, the mother whale and calf likely would have been killed as they had resisted human attempts to herd them to sea. “I don’t speak whale and I don’t speak dolphin,” Conservation Officer Malcolm Smith told the BBC in 28, “but there was obviously something that went on because the two whales changed their attitude from being quite distressed to following the dolphin quite willingly and directly along the beach and straight out to sea.” Bucephalus the Horse and Cher Ami the Pigeon also feature.