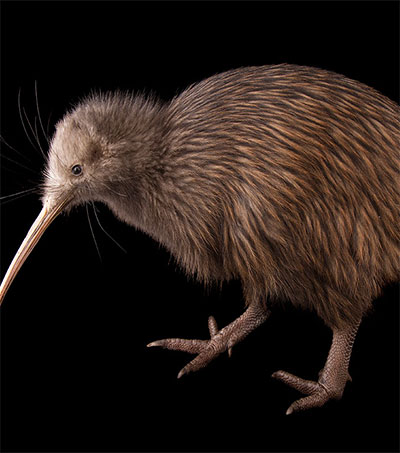 New Zealand’s Iconic Kiwi May Be Losing Its Sight

The flightless nocturnal kiwi may be evolving to lose its eyesight altogether, suggest researchers. The blindness was discovered during a study of 160 Okarito brown kiwis (Apteryx rowi) in the South Island’s Okarito forest. The birds seem able to survive just as well using other senses such as touch, smell and hearing, so maintaining good eyesight might just be a waste of energy.

“We found a very high prevalence of birds with eye lesions,” says Alan Tennyson at the Museum of New Zealand Te Papa Tongarewa in Wellington. “A third of them had eye problems.”

But the biggest surprise was chancing upon three sightless birds. “The finding of completely blind birds in good physical condition was absolutely stunning,” says team member Christopher Murphy at the University of California.

“No other birds are known to have a free-living population of blind [individuals],” Tennyson says. But plenty of other animals, such as moles and cave-dwelling fish, have evolved blindness. “Vision is not essential for survival in all animals.”

The discovery could help explain how species lose their sense of sight, a process called regressive evolution.

The most likely explanation is that kiwis do not need vision because of where and how they live: they are active at night, and their habitat offers plenty of food and no predators, apart from introduced animals such as stoats.

The blind Okarito brown kiwis are a great opportunity to study how visual systems evolve and change, Tennyson says. But only if they survive: they are endangered, with about 400 left in the wild.