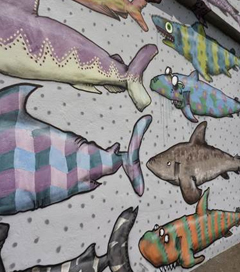 The New Zealand government has agreed to a full ban on shark finning, though fill implementation of the ban won’t happen for another three years.

The Wall Street Journal reports that it is already illegal in New Zealand for fisherman to remove the fins of a shark and dump its body back into the ocean while the creature is still alive. However, new rules will prohibit fisherman from dumping sharks bodies even if they’re dead, instead they will be required to bring the entire body to be brought in, making it less profitable to market shark fins.

Global campaigns to take shark fins off the menu have been growing as more types of shark have joined the list of endangered species. The New Zealand Shark Alliance says more than 100 million sharks are killed each year for their fins alone.

Meanwhile, Wellington street artists BMD have transformed a bland inner-city wall into a colourful political statement aiming to press the Government into action against shark finning (pictured above).

Though environmental groups welcome the move, they criticised the government for allowing the practice to continue for another three years.