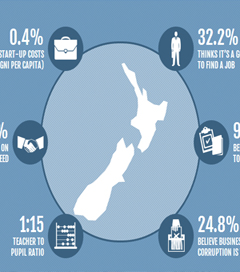 New Zealand is sitting amongst the top ten most prosperous nations globally, according to the Legatum Institute’s 2013 Prosperity Index rankings.

Placing fifth, on a list otherwise heavily populated by Scandinavians countries, New Zealand sits two places ahead of Australia (7th), but has slipped two places since 2009, a spot now held by Canada.

The Legatum Institute, a UK non-profit thinktank, measure prosperity based on 89 factors spread across eight categories: economy, entrepreneurship and opportunity, governance, education, health, safety and security, personal freedom, and social capital. Two of the main drivers of prosperity, however, usually include the quality of governance and the extent to which entrepreneurship thrives.

New Zealand placed first in education, but received its worst ranking in health, where it placed 20th. The country’s ranking Safety and Security has also moved down, slipping eight places to now sit at 15.