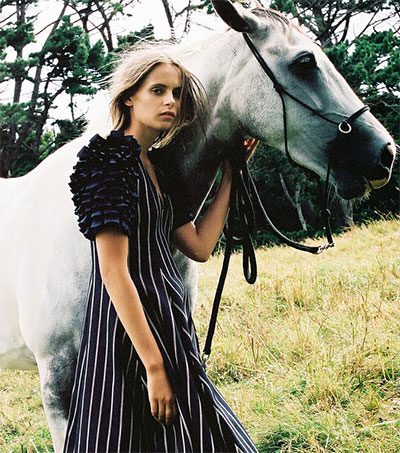 Bristling on the back of an oversize coat, circling the sleeves of knits, bursting from the shoulders of a sweatshirt: Ruffles show up where you least expect them in New Zealander Maggie Marilyn Hewitt’s latest collection, Merrell Hambleton writes for the New York Times.

That’s just how Hewitt, 23, wants it. “Rule Breaker,” “Revolution” and “Change the Rules” are cheeky names for garments in the collection, but they could also be earnest taglines for Maggie Marilyn, the eponymous line that Hewitt launched last September. “There’s a freeness and playfulness in the clothes,” she says. “The feeling that you’re not conformed or constricted by anything.”

Hewitt executes her own nonconformities – cinched sleeves on a “board roomy” men’s shirt; a flouncy dress cut from power-suit pinstripes — with such confidence that it’s easy to forget how young she is. Less than a year out of Auckland’s Whitecliffe College of Arts and Design, her first season debuted at last year’s Mercedes-Benz Fashion Week Australia, where it was immediately snapped up by Net-a-Porter. This summer, she was shortlisted for the 2017 LVMH Prize by a panel of judges including Karl Lagerfeld, Marc Jacobs and Phoebe Philo.

A childhood spent climbing trees and jumping off jetties informs Maggie Marilyn’s third collection, available at Net-a-Porter, Saks and others, which is punctuated by generous cuts, raw edges and “utilitarian” materials like cotton and denim. “You can eat in the clothes, you can run in them,” Hewitt says. “They’re not too precious.”

One look from the fall/winter ‘17 collection neatly summarises her philosophy and ambitions: a “Hold Your Own” knit worn over a deceptively simple slip dress called – what else? – “Don’t Underestimate Me.”