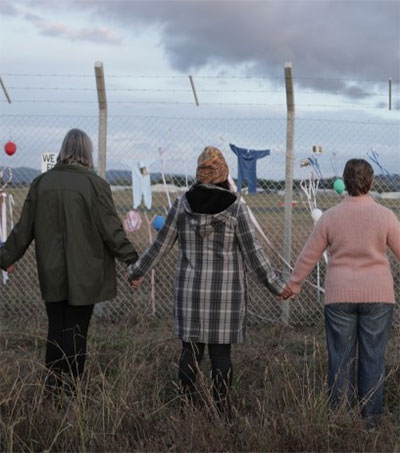 The third feature from New Zealand-based filmmaker Briar March is the “gripping documentary” Mothers of the Revolution, which celebrates the women protesters of Greenham Common. Wendy Ide reviews the film for Screen Daily.

“The British press derided them as harridans and harpies; the locals dismissed them as ‘malingerers and vagrants’ with, God forbid ‘a lesbian agenda’; the police regarded them as fair game for brutality and bullying; their very presence unleashed a torrent of male aggression,” Ide writes. “But the women protesters of Greenham Common stood firm against intimidation and mockery, and, as this thoroughly researched and appropriately feisty documentary argues, they ultimately changed the course of our future. Informative without being didactic or preachy, Mothers of the Revolution combines contemporary interviews, archive footage, dramatic reconstructions and animation to tell a story which started at a kitchen table in Wales and had ramifications which spread around the globe.

“But it’s in the details of the women’s personal journeys – and, in some cases, great personal sacrifices – that we find the picture’s considerable emotional impact.”

March’s previous films are Once Was An Island (about climate change) and A Place To Call Home (about New Zealand’s housing crisis).