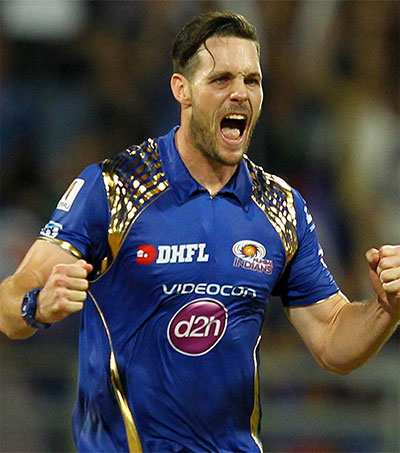 Former Black Cap Hastings-born Mitchell McClenaghan, 31, will be among the players featured in a new Netflix reality series on the most successful team in the Indian Premier League (IPL), the Mumbai Indians.

The streaming giant is producing an eight-part series documenting the team as it attempts to win the league for a record fourth time in 2018, The Hollywood Reporter notes.

“The series will spend time with players in the 2018 season on and off the field, on the road and at home, to go deep into the cricketing values and traditions that make the Mumbai Indians the most followed team globally, all leading up to the IPL18 final,” the trade paper reported.

The current squad, led by Indian hero Rohit Sharma, also includes Australian all-rounder Ben Cutting and fast-bowler Pat Cummins. McClenaghan, who has played 48 one-day internationals and 28 Twenty20 games for New Zealand, was a late addition to the Indians squad after Australian bowler Jason Behrendorff was ruled out of the season due to a back injury. He had previously played for the Mumbai team for three seasons.

The series is being produced by Condé Nast Entertainment, which last year earned a Peabody nomination for its gritty American college football reality series Last Chance U.

The surprise cricket series is seen as another global push by Netflix, which is looking to expand among India’s 1.3 billion residents.

“The next 100 million [subscribers] is from India,” Netflix chairman Reed Hastings said in February about the entertainment company’s plans.

The series will be available in 190 countries, including New Zealand.