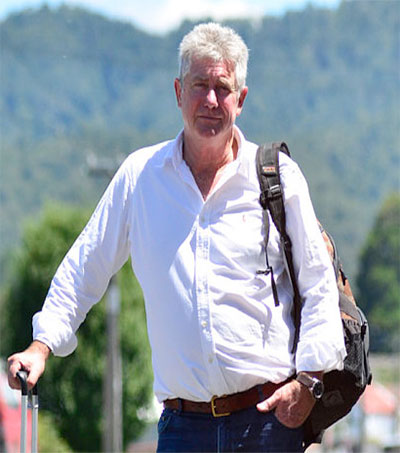 Thirteen years after he began exploring the globe, New Zealander John Bougen expects to be named the world’s best-travelled man by the end of the year. And he knows who to thank.

“I had the best mother-in-law in the world,” Bougen says. “The two of us got on really well and Barbara inspired me. She was one of the first New Zealand women to visit Nepal, and it was nothing to her to charter a plane. She was the ultimate traveller.”

Well, not quite. For, at the cost of around £350,000, Bougen is about to outshine her by visiting all of the world’s 247 countries and territories. He has ticked off 232, including Alaska, East Timor and Robinson Crusoe island, and intends to visit the rest before December.

The 57-year-old already has three Guinness world records to his name (including for the most countries visited in six months which he achieved with his cousin James Irving) but he is determined to become the first person to visit the full list, eclipsing a Japanese couple who died before South Sudan gained its independence in 2011.

“The gates are open,” he says, on his way back from the South Atlantic island of St Helena, the latest territory crossed off his list.

John Bougen has had extensive involvement in many of New Zealand’s largest shopping centres. He is one of New Zealand’s most experienced retail leasing and planning consultants. He founded Dress-Smart, New Zealand’s largest chain of discount factory outlet shops. He is also a publisher, photographer and philanthropist. One of his books, My Dream: Listen to the Children (Penguin, 2003) is a photographic account of his original travels to 191 countries. He photographed a child in each of the visited countries and then recorded their answer to a very important question: “if one of your dreams could come true, which one would it be?”