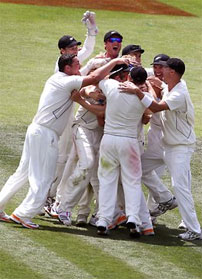 The Black Caps celebrated “an early Christmas” with front-page media praise for a seven-run cricket victory in the second Test over Australia in Hobart. Captain Ross Taylor’s remark that the historic win “was for the New Zealand public an early Christmas present” was pounced on by the media as the victory slogan. “Christmas cheer for Black Caps,” said The Press as Radio New Zealand rated the drought-breaking win as “one of the most remarkable” in New Zealand’s cricket history. The Dominion Post said the match turned on Doug Bracewell’s “magical spell” to secure New Zealand’s first triumph in Australia since 1985 when Richard Hadlee was in his prime. “The result doesn’t suddenly make New Zealand world beaters. But it does show what is possible with skill, perseverance and heart,” New Zealand Herald columnist David Leggat wrote.