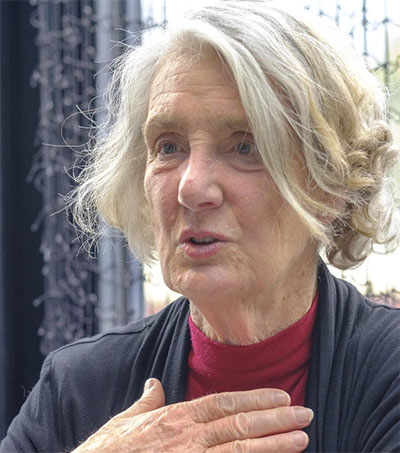 The influence of Jane Austen on Hairy Maclary From Donaldson’s Dairy may not be immediately apparent, but it’s there. At least that’s what New Zealander Lynley Dodd said at the opening of the The Lynley Dodd Story, an exhibition on at the Yarra Ranges Regional Museum in Melbourne. And she should know, Jason Steger writes for The Sydney Morning Herald. Dodd is the creator of the much-loved Hairy and an enthusiast of the much-loved Austen.

OK, you can’t see Mr Bennet in Hairy, Steger writes for the newspaper. And you can’t see specific allusions to the great English novelist. What Dodd – Dame Lynley Dodd to be correct – says impresses her about Austen is her language and the wonderful characters she created. “Who could do better than Mr Collins [the unctuous vicar in Pride and Prejudice]? It’s really just the fact that I love language and I want the language to sing for the children.”

Hairy Maclary is one of those characters from children’s books that everyone seems to know. Indeed, anyone who has been a child in the past 40 years or so, has had children or has been in the company of children for any length of time is bound to have encountered the adventures of the shaggy black mutt and his gaggle of chums.

Hairy made his debut in 1983, but Dodd had been published for the first time 10 years earlier when she had been asked to do the illustrations for My Cat Likes to Hide in Boxes, with words by a cousin of her husband’s, Eve Sutton.

Hairy is an amalgam of several dogs Dodd has known “including one that was kept back for a year at obedience school”. In Scotland, readers claim him as a Scot and as Dodd has a Scottish background she concedes a little bit of him is from there, “but he is a New Zealander”.

When Dodd was growing up, one of the writers she adored was Theodor Geisel, aka Dr Seuss. Post war, she says, children’s books were moralistic and boring, but when his arrived at school “they were wonderful”.

“He took such liberties and he wrote really serious stories but in such a lunatic way.” He presented her with an award for My Cat Likes to Hide in Boxes in 1975.

She’s meant to be writing another Hairy Maclary but she says her publisher is despairing because she should have started some time ago. “There’s so much to do with Hairy now even though I write other books as well and the next one is not one of the series. He’s a brand now, so I’ve got to make decisions about the brand, trademarks and things.”

She’s as busy as her creation.

The Lynley Dodd story is at Yarra Ranges Regional Museum until 26 January 2020.