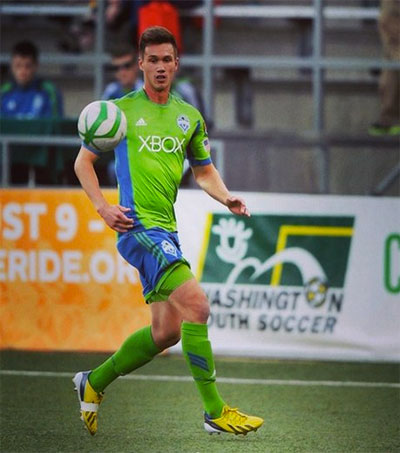 Luis Esteves Making His Mark as a Johnny in US

Auckland-born Luis Esteves is making a name for himself playing soccer as a senior midfielder for St. John’s University in New York. While he looks towards the future, it’s impossible to overlook his incredible journey to St. John’s.

Growing up in New Zealand, Esteves played rugby, which is considered the most dominant sport in the country, from age nine to 13, but he stopped to concentrate on soccer.

“My dad is from Portugal so I played soccer because of him,” Esteves said.

Esteves attended King’s College in Auckland, a boarding and day high school. He claims that going to boarding school made transitioning to new schools and travelling that much easier. “The transition to a new school and place was pretty easy because I was already used to being away from home and my family,” he said.

In New Zealand, he received guidance to help him attend school and play soccer for the University of Mobile in Alabama. As a Mobile Ram, Esteves appeared in 30 games, including 27 starts, in two seasons. Esteves helped the Rams post a 17-5-2 record and reach the NAIA National Championship Finals as a freshman. Through contact with St. John’s Red Storm teammate and fellow New Zealander, Andrew Withers, Esteves became interested in St. John’s.

Esteves’ goal is to eventually follow in his U23’s teammate’s footsteps and head into the professional level.