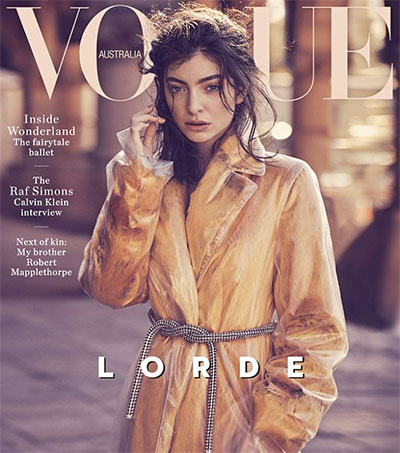 As global superstar Lorde prepares for the Antipodean leg of her Melodrama World Tour, the 20-year-old Vogue Australia cover girl chats to Alice Birrell about exiting her teenage years, coping with soaring success and the goal of making music that stands the test of time.

“The hard thing was when people would ask me: ‘Do you feel 16?’ and I’m like: ‘I don’t know, I’ve never been 40.’ It was really confusing,” Auckland-born Lorde tells Vogue.

She says the release of her current album reflects a new chapter in her life. “I basically turned 19 and the world was like: ‘Alright, we’re going to toss everything up in the air and it’s all going to come down in a really crazy way.’”

In the October issue, Lorde also gives insight into her songwriting, explaining how she goes about the process, “I’ll notice something and write it down and I’m definitely doing that all the time,” joking that her friends must find it annoying. “I do it constantly: my notes are just full of my observations.”

Lorde performs in Manchester on 26 September, London’s Alexandra Palace on 27 September and in Brighton on 28 September.

She returns to New Zealand in November, opening her Down Under tour with a sold out concert in Dunedin.