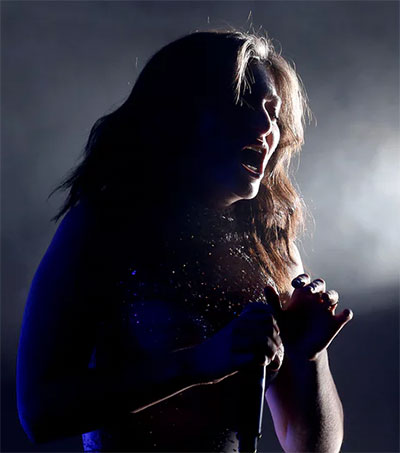 “Lorde used her late-evening (Coachella) slot to showcase material from her forthcoming album, Melodrama. Starting off with a portion of her lead single, Green Light, she performed staring straight down the barrel of the backstage camera [with] an assured confidence that could have easily seen her as a headliner,” Lanre Bakare wrote in a Guardian review of Lorde’s first performance at the two-week festival.

The Auckland-born singer took to the main stage ahead of headliner Kendrick Lamar.

“After older tracks such as Tennis Court and the Disclosure collaboration Magnets, she told the audience to expect surprises and said her new album is about the ‘dichotomy’ of having a fantastic night out turn to dust,” Bakare wrote.

“Whether or not fans get the intricacies of the mindset she’s sketching out in her new work, at its core this is music too well-crafted to fail.

“Even with so much new material, the crowd maintained their attention, and tracks such as Homemade Dynamite and Sober exhibited the sophisticated pop she specialises in. Royals and a full version of Green Light finished off a set that showcased a pop star able to hold her own on the biggest of stages.”

Lorde, 20, next performs at the New Orleans Jazz & Heritage Festival on 30 April before hosting her own one-off show on BBC Radio 1’s Big Weekend slot on 27 May.

Melodrama, the singer’s second studio album, is scheduled for release on 16 June.