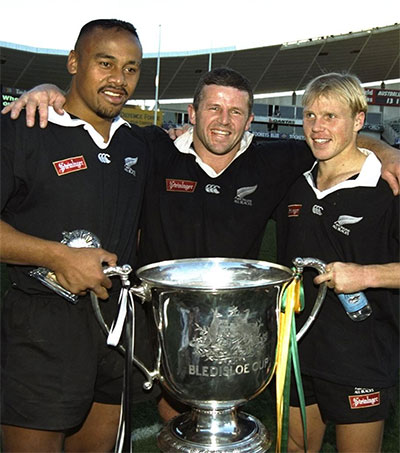 Looking Back at Our Rugby Heritage

“New Zealand’s pride for its team reflects generations of history and tradition, going back to 1903,” Jamie Tarabay writes in a story for The New York Times, entitled: ‘What Makes the All Blacks So Indomitable? It’s in Their DNA’.

“New Zealand’s famed All Blacks are the most successful rugby team of all time, with a win rate of nearly 80 per cent,” Tarabay writes. “They held the No 1 world ranking for almost a decade, losing it briefly for a few weeks in August before reclaiming it for a week, then dropping to No 2 again. They won the last two World Cups, and the players wear the expectation of a third championship the way they wear the expectation that they will win every time they walk onto the field. And they nearly always do.

“That indomitability? It dates from 1903, when the team played its first test match.

“‘As a nation, we were colonised, and it was a way for us in our isolation to show the world that we could be successful, we could beat the mother country, England,’ coach Steve Hansen said in an interview.

“‘If you go back far enough,” Hansen said, ‘this team was the first to give New Zealanders the confidence that, hey, we can compete against the big wide world, and that’s why I think there’s a connection with every New Zealander and the team.’

“Jeff Wilson, who played for the All Blacks in the 1990s, compared New Zealand’s affinity for the game to that of Brazil with soccer, or the United States with basketball.

“‘There’s an inherent skill set with rugby which is part of our upbringing and the way we’re encouraged to play,’ Wilson said. Players start young, learning from parents, and weekends are spent at rugby matches with families cheering from the sidelines.

“Going into the [2019 World Cup] tournament, the team knows there are targets on the back of each of those black jerseys. But Hansen insisted that it was just part of being an All Black.

“‘Not only are we expected to win test matches every time we play, but by big margins, and we believe that pressure will be something that will give us an advantage,’ he said. ‘It’ll be interesting to see who can cope with it and who can’t, because the tournament demands that they do.’”