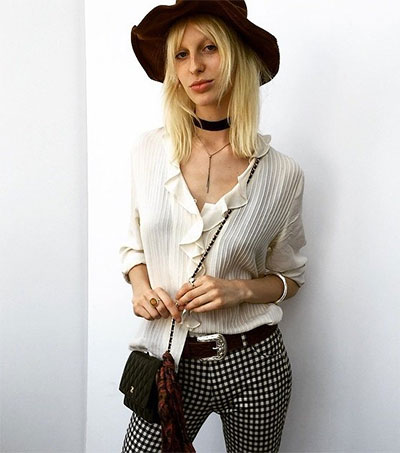 Originally from Auckland, 21-year-old model Lili Sumner, who took to the catwalk at Paris Fashion Week this month, is one of the “Saint Laurent model girl gang”, according to Vogue.

“And from the looks of it, it’s as if the core group of bleach-blonde-coiffed or inky-tressed runway walkers has known each other forever.

“The proof of their live-fast friendship is in the pictures: their Instagrams, which range from tongue-out, flip-the-bird snaps of Sumner and Hartzel in some dim-lit club to Sumner with her gap-toothed grin in a bricolage of vintage (which she often borrows from her fellow Saint Laurent friends).”

In 2013, i-D magazine wrote: “To say [Sumner] embodies [Saint Laurent] is an understatement. You can picture [her] slouching around all pale in the sun with a group of similarly skinny, pale friends on Venice Beach, or stalking the banks of La Rive Gauche like an upper class rebellious teen; she’s the epitome of [Slimane’s] ideal Californian grunge. But when you speak to her, she’s got a soft New Zealand accent; she’s polite, a little bit crazy and not as much of a goth as [Slimane] would have you think.”