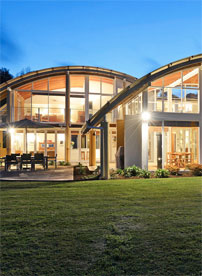 Foreign buyers are mostly drawn to the Auckland area, or to the lake and mountain views near Queenstown on the South Island, according to The New York Times. Bill Sandston, a real estate lawyer and partner at the national law firm Chapman Tripp, says buyers come from Australia, the United States and Europe – especially Britain, because of its historical ties to the region. The four-bedroom glass-encased home pictured, designed to create the impression of living without walls, was built in 1980 by New Zealand architect, Simon Carnachan. It faces Mahurangi Harbour and Great Barrier Island. Because the house profiled here has more than 10 acres, a foreign buyer would need government approval. “The great majority of them are,” Sandston said.