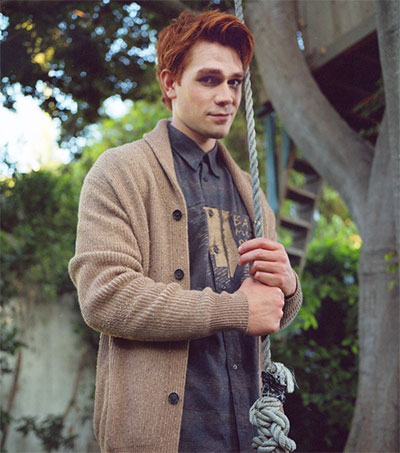 Right now, only a handful of people know what happens after the big cliffhanger from Riverdale’s season one finale: whether or not Fred Andrews, who was shot in Pop’s Chock’lit Shoppe, has survived. But if you’re looking to Aucklander KJ Apa, 20, who plays Archie, for spoilers, you’re going to be disappointed.

What’s it been like keeping the secret? “It hasn’t been too hard,” Apa tells Teen Vogue. “I mean, obviously everyone’s been asking me. I just think people will be surprised,” he adds.

While we have yet to get a feature-film-length episode of Riverdale, the show has been expanded to a solid 22 episodes. That means our visit to the town where everything seems to go wrong is about to get longer – and considerably darker.

“I was really happy,” Apa says about his reaction when he first read his scripts for season two. “I knew it meant that I got to dive in to some serious stuff.” But he says he “wasn’t surprised” about the darker storylines.

Apa, however, was up to the challenge. “I knew that it would be challenging, which, as an actor, is good,” he says of the subject material. “I think when you get too comfortable with the work, it can come across kind of mediocre. I definitely saw it as a really good challenge for me as an actor, it really tested me. I’m proud of what we all did” in season two, he says.

Apa recently appeared with some of the Riverdale cast, and Miley Cyrus, on an episode of The Tonight Show Starring Jimmy Fallon.

Riverdale is back on US screens on 11 October.