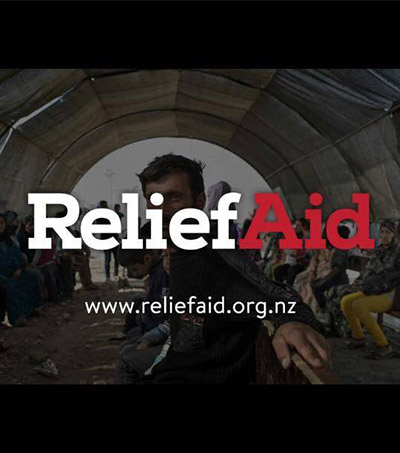 ReliefAid is one of only a handful of organisations able or willing to support those affected by the ongoing conflict.

Their current appeal ‘Communities Under Fire’ focuses on the distribution of shelter items to families brutally affected by the civil war inside Syria.

Supporting the appeal will help ReliefAid to distribute winter shelter kits comprised of items such as blankets, mattresses, solar lamps, water filters and children’s clothing to families in Aleppo City, Northern Syria – an area, which has been disproportionately affected by the conflict.

Seawright founded ReliefAid in late 2014 following a decade of experience in conflict affected countries such as South Sudan, Pakistan, Afghanistan, Iraq and Syria, and after seeing the inability of many aid organisations to get staff and resources into conflict zones. In contrast to some other organisations ReliefAid works directly on the ground, in the places relief is most needed and least accessible.

After Rebels had overthrown the government in Yemen in early 2015, northern neighbour Saudi Arabia began airstrikes to keep the Houthi rebels away from its border. According to Seawright these events created a dire humanitarian situation unparalleled even in places as battle-scarred as Syria.

“We were receiving a lot of patients with severe injuries, including traumatic amputations — people would come in missing feet, hands and with severe abdominal and head trauma. Many of the wounded had traveled from four to five hours away, given that it was the only hospital with emergency surgical capacity in the province, in fact in most of northern Yemen,” writes Seawright, who was based at a hospital in Saada City in a Houthi-controlled area that was experiencing almost daily attacks from coalition air forces.

He recalls the moving story of a 3-year-old boy with severe burns who came in to the emergency department in Saada with his uncle and father. While their house had been hit by coalition forces the boy’s father and uncle had jumped on top of him to protect him. Even though their bodies were between the blast and him, he was still quite burnt down one side of his body – but he will recover.

Havelock North-born Seawright trained as a marine biologist, has taught English in South Korea, ridden the IT boom in London, worked with Medecins Sans Frontieres (MSF) in Pakistan and Turkmenistan, run the Afghanistan desk for NZAid, and was programme director with the Fred Hollows Foundation in Auckland.

For more information on ReliefAid’s work and the ‘Communities Under Fire’ appeal please visit ReliefAid’s website or Facebook page.