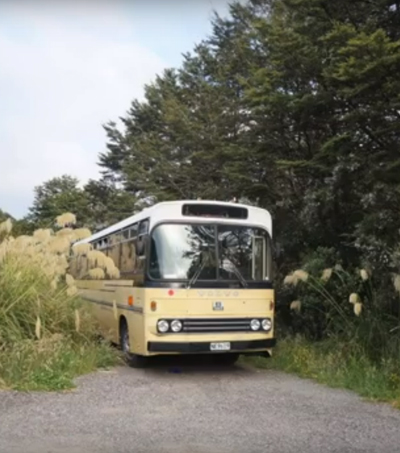 After being trapped during the Christchurch earthquake, New Zealand couple Andy and Amber Cleverley ditched their house for a house bus, in which they want to travel around New Zealand with their children, as reported in The Daily Mail.

The New Zealand family of four currently is renovating the 11 metre long bus.

“I was working away in the corporate world and when the Christchurch earthquake hit we were 25 storeys up in a high rise hotel. We got trapped because the fire stairs collapsed and we weren’t sure we’d get rescued before the building collapsed so we had to crawl down through broken stairs, rubble and broken pipes onto the roof of the car park next door,” said Andy Cleverley.

“In that moment we realised what life is all about.”

After the earthquake the couple moved to Australia where their first child Jake was born. “However the life-changing experience of being stuck in a major earthquake caught up with Mr Cleverley and he was diagnosed with Post Traumatic Stress Disorder (PTSD),” as reported in the article.

They left Australia and some time off work to reassess where they were at. It was then that they remembered how they felt when stuck in that building.

They thought that if they got out of there, they would live life differently and that “life isn’t about sitting in an office, traffic, or working for a big corporate organisation”.

After a lot of thinking, the “couple decided that renovating a bus was the method that ticked all the right boxes in their quest to escape their normal lives.”

“In the end we looked at these people who have been living and travelling around in buses and we thought we’re going to do it and hopefully this is something we can do for a long long time,” Mr Cleverley said.

“We’re going to be fully off grid, we’ll have solar power and our own water holding tanks and we’re going to supply our own protein by fishing and hunting,” said Mr Cleverley.

“They kids are super excited, they love jumping in the bus and Jake’s very, very excited to have a little bunk.”

According to The Daily Mail “they expect to have the renovation complete in the next 12 months, before setting off to chase the seasons as they cruise around New Zealand.”