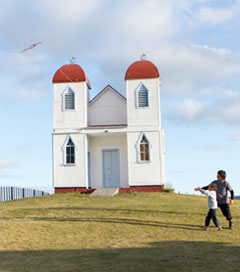 Eight locally made short films will screen at the one-session New Zealand Short Film Festival held on 14 August in Sydney and 22 August in Brisbane. The films will screen representing the very best of the past year’s short-form movies. “We have been faced with the awful task of choosing between equally outstanding films,” head of the selection panel Malcolm Jorgensen says. “We’ve reluctantly excluded some that would have been a highlight in previous years.”

“There are half a million New Zealanders living in Australia, yet this is the only dedicated New Zealand film festival in the country,” festival director Kim Endean says. “No other medium provides a better way of reconnecting with the familiar cultural references and visual scenes that make Kiwis remember – and appreciate – who they are and why they are proud to be a New Zealander.” The lineup includes Tammy Davis’ Sonny, My Older Brother (pictured); animated film, Shelved, directed by James Cunningham; and Tess Novak-directed comedy A Kiwi Legend.