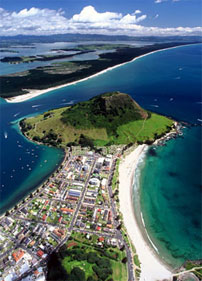 It’s Better Than Ever

The Bay of Plenty region has launched a new tourism campaign in an attempt to erase images of oiled beaches and dead wildlife from the minds of potential visitors, rebranding itself with the slogan “It’s not called the Bay of Plenty for nothing” following the grounding of the Rena container ship 22km off Tauranga’s coast in October. Tourism Bay of Plenty this week announced a new “recovery campaign” to help lure back the visitors who have cancelled summer trips to the area. Campaign manager Linda Macpherson said it’s time to restore the area’s reputation. “What we’re saying now is ‘come’ — the beaches are open and there’s so much to do here, to feast on, to enjoy. In fact, it’s better than ever,” Macpherson said.