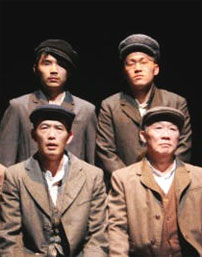 New Zealand actor Charles Chan writes about his role as Wang in the play The Bone Feeder — which was on at Auckland’s TAPAC in November — for a story in The Malaysian Star. The Bone Feeder was produced by poet-playwright-doctor Renee Liang and directed by Lauren Jackson and was inspired by the sinking of the SS Ventnor off Hokianga Harbour in 1902 resulting in the loss of 13 lives and its strange cargo – 499 coffins carrying the remains of Chinese miners bound for reburial in their ancestral graves in China. Over time, some of the bones wrapped in silk were washed ashore at Mitimiti in the Far North and found by local Maori who laid them to rest in their sacred burial ground. Chan writes: “What made Liang’s play so special is that, for the first time in New Zealand, a story about early Chinese-Maori contacts is told by the Chinese themselves with the collaboration of a Maori actor, supported by a remarkable soundtrack and performed live with an intricate blend of Chinese and Maori instruments.”