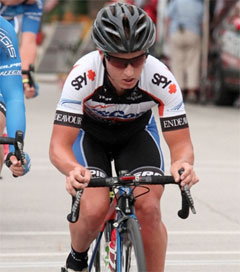 Auckland cyclist Alexander Ray has won the Bloomington Jaycee Criterium in Illinois. The 22-year-old’s solo breakaway with six laps left so shredded the legs of his opponents, he had more than enough strength to hang on for the $500 first prize in the pro Category 1-2 race.

“There were a bunch of good guys here,” Ray said. “I just knew that I wanted it more.”

The ISCorp Cycling Team star covered 47 laps on the one-kilometre course in 1 hour, 2 minutes, 3 seconds, topping out at 38.5 mph on the downhill portion of North Main Street.

When asked about his career goal, Ray said, “Go right to the top. Ride on a pro team and do the biggest races in the world [including the Tour de France].”