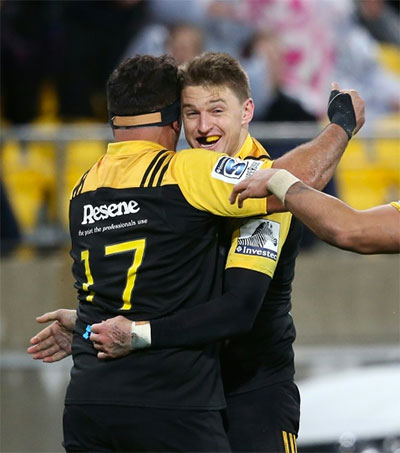 “After 20 years of waiting, Hurricanes fly-half Beauden Barrett dived on a loose ball with little over 11 minutes remaining to score the winning try and secure his side’s first Super Rugby title with a 20-3 victory over South Africa’s Lions [at Westpac Stadium in Wellington],” Harry Yorke writes for the Telegraph.

“Both sides had endured more than 20 years of pain prior to reaching [the] final.

“The Lions had perennially been South Africa’s worst side in the competition and were even relegated from Super Rugby in 2013 before rebuilding through the domestic Currie Cup.

“The Hurricanes had romped through last year’s competition, and were heavy favourites to clinch their first title, only to fall apart in the final against the Otago Highlanders.

“This year’s team, with only six players who started last year’s final starting on Saturday, were not going to let lightning strike twice, however.

“The Hurricanes line speed in defence, which has been clinical since the competition resumed following the June international break, was in the face of the Lions’ playmakers, with [Elton] Jantjies constantly harried.”

Liam de Calme, reporting for the South Africa Times, wrote: “Barrett delivered a master class in the wet as he applied pressure on the scoreboard and territorially on the visitors.

“With their rush defence fully operational the Hurricanes applied near unbearable pressure on the Lions’ ball carriers.”