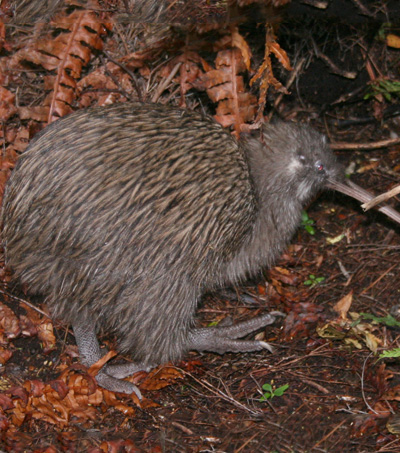 How NZ’s Glaciers Shaped the Origin of the Kiwi Bird

When the kiwi arrived in New Zealand several million years ago “it found few threats and plenty of opportunities.” “In the absence of mammals, its descendants gradually lost the ability to fly, as island birds are wont to do,” and “transformed into that icon of New Zealand—the adorable, bumbling kiwi,” writes Ed Young in an article for National Geographic.

While scientists until recently only recognized three species of kiwi, Allan Baker from the Royal Ontario Museum in Canada showed in 1995  that the brown kiwi actually already was three different species (North Island brown, the Okarito brown/rowi and the southern brown/tokoeka). After Baker passed away two years ago, his colleague Jason Weir continued his work and showed that “there are actually 11 genetically distinct lineages of living kiwis, as well as six that have gone extinct,” as reported in the article.

According to Weir “many of these lineages are very young, having diverged from one another within the last million years, and as recently as 110,000 years ago.”

He thinks that glaciers drove them apart. As glaciers “expand, they can cut kiwis off from one another, allowing them to chart their own evolutionary courses.” His studies showed that kiwis started diversifying five times faster in New Zealand’s glaciers most severe cycles of expansion and contraction.

“The kiwi is as close to a standard sessile mammal as you can get and still be a bird. They don’t fly, so it’s very easy for physical barriers like glaciers to split populations in two,” said Alan Cooper from the University of Adelaide.

“This study means we now we have conclusive support for obtaining funding, or dividing available funding, across all of the lineages,” said Isabel Castro from Massey University in New Zealand.

“And it tells us we need to concentrate on those species that we don’t know anything about, like those on South Island, and learn what we can to protect them.”