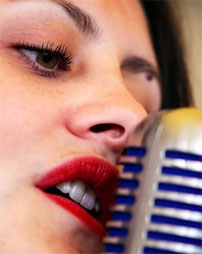 Auckland jazz singer Sarah Frances Johnston, 21, is this month beginning a two-month residency performing at Oscar’s Beef, Booze and Broads at the Plaza in Las Vegas. Johnston, who began acting at age 11 in Shortland Street, has also modelled in ads for Coca-Cola and Toyota. But most would agree that it’s Johnston’s voice that draws you. “When I heard her, I couldn’t turn away. I had to talk to her,” says manager Sean Smith, who discovered the singer during a performance at a resort in Samoa in 2009. Johnston has gained a small but devoted following of local fans. One of them is guitar legend Carlos Santana. A huge fan, Johnston introduced herself after her set, and Santana sat down at her table to give the young singer some unsolicited career advice. “He said we were both given gifts with music, and that every morning when you wake up, you have to use that to harpoon the hearts of your listeners,” she recalls.