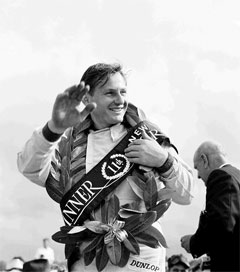 Half a Century of Legend

Fifty years ago, New Zealander Bruce McLaren launched a company that has gone on to become one of the greats of world motorsport and on 2 September this year, McLaren Group will celebrate its achievements over the past half-century with the words of their founder – “Life is measured in achievement, not in years alone”. Executive chairman of McLaren Group and McLaren Automotive Ron Dennis said: “McLaren’s history is long and storied, but McLaren’s legacy is harder to define – and that’s because it’s still being vividly written every day by the dedicated men and women who work at the McLaren Technology Centre.” McLaren was born in Auckland. He died at 32, when his Can-Am car crashed at the Goodwood Circuit in England on 2 June 1970.