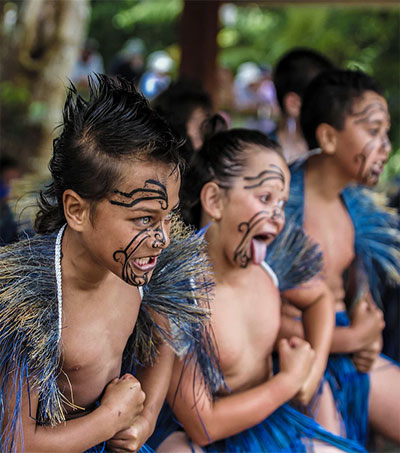 Te Reo is undergoing a revival – lessons are packed, songs are top of the pops, and even the prime minister wants to be part of it. Māori language teachers from Auckland to Dunedin and Invercargill say they are unable to meet demand for their services and free classes routinely draw hundreds of students. Big business is on board, too.

Google has launched a Māori version of its website, Vodafone has helped Google Maps record more accurate Māori pronunciations, Disney has released a Māori version of the hit Polynesian film Moana, and Fletcher Building has rolled out bilingual signs on all its construction sites.

“There’s an increasing sense that te reo is good for identifying your business as committed to New Zealand,” chief executive of the Māori Language Commission Ngahiwi Apanui said. John McCaffery, a language expert at the University of Auckland school of education echoed his point, saying more than a third of Māori teaching graduates were snapped up by big business keen to build stronger relationships with Māori and tribal groups with significant financial portfolios.

McCaffery says the language is thriving, with other indigenous peoples travelling to New Zealand to learn how Māori has made such a striking comeback. “It has been really dramatic, the past three years in particular, Māori has gone mainstream,” he said. “What we’re seeing is a clear indication that the language’s status and prestige has risen dramatically and research shows that is one of the key indicators of whether children and young people will be interested and committed to learning it.”

According to surveys by Te Puni Kōkiri, a Māori public policy group, “attitudes towards the Māori language among Māori and non-Māori are improving”, and “the Māori language currently enjoys a high status in Māori society and also positive acceptance by the majority of non-Māori New Zealanders.”

Māori language experts say the language has never been more widely used, normalised or respected. The dark days, they say, of Māori speakers being beaten and punished are long gone.

“I think there is increasing awareness that there is intrinsic value in learning te reo, that it is the language of this country,” said Dr Arapera Bella Ngaha, who is studying the revitalisation of te reo at Auckland University. She relearned te reo as an adult after she was banned from using it at boarding school. “It has become cool and I am very happy about that. For a long time we thought it was over.”