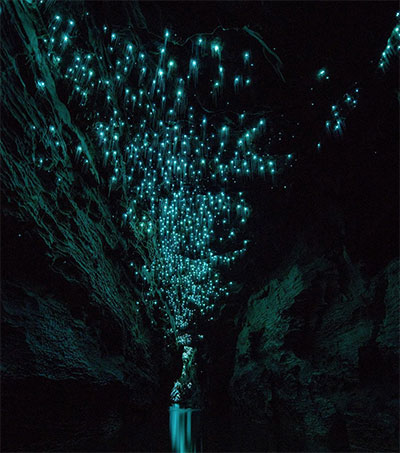 British photographer Shaun Jeffers spent up to eight hours submerged in cold water to capture the tranquil and illuminated blue scenes at Ruakuri Cave in the Waitomo area.

The worms light up the cave as they hang from the walls of the cave above a pool of water. Light from the worms is surprisingly bright, and highlights every crease in the limestone cave.

Jeffers told Shutterstock editorial that the Waitomo area was well known for its limestone caves, which are occupied by what he says are “one of the most magical insects in the world”.

“Glow worms emit a luminescent glow that lights up the cave and creates a surreal environment,” he said.

The Ruakuri Cave is located about 200km from Auckland.

Ruakuri translates to “den of dogs”. According to Maori legend, the cave was discovered between 400 and 500 years ago by a young Maori boy who was hunting for birds. He was attacked by dogs just outside the cave entrance.