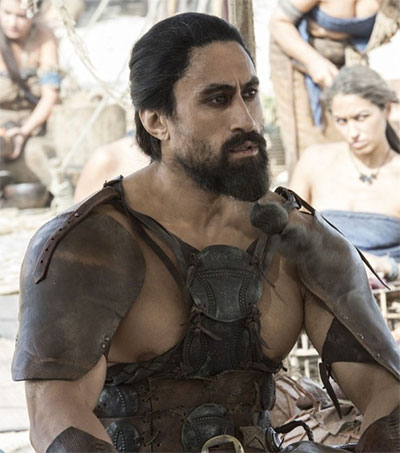 Game of Thrones star, New Zealand-born Joseph Naufahu, 38, talks with People magazine about the problems of speaking Dothraki, and about fighting in his underwear.

Naufahu, who made his debut as Khal Moro in the Season 6 premiere of the popular television series, says his character is loyal.

“He’s never had his hair cut, which means he hasn’t lost a battle,” Naufahu explains. “He’s definitely a good guy. Maybe a little bit misunderstood. All bad guys are misunderstood.”

Dothraki is just as tough to learn as it sounds. “It’s tough,” Naufahu admits. “It’s got no rules, it’s completely fabricated as opposed to French or Spanish, they have rules, there is language structure. I had to learn the sound then match the words, and you’re not only learning your dialogue, you’re learning the other actors’ because you have to react to what they say.”

The Dothraki fight choreography came easy to Naufahu, a former professional rugby player for the Glasgow Warriors. “It’s always fun,” he says. “Running around with swords in your underwear, you’re like a little boy again.”