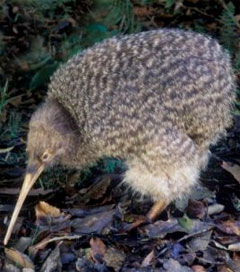 New fossil research suggests the flightless kiwi and emu share a common ancestor able to fly, which travelled over to New Zealand from Australia millions of years ago.

Experts have long assumed that the kiwi came from the equally endemic but now extinct giant moa.

Yet fossils have now been found in the South Island which appear to contradict that theory. Dating back 20 million years to an ancestor of the modern kiwi, they appear to be much more closely related to another large flightless bird – the Australian emu.

Palaeontologist Trevor Worthy, himself an expatriate New Zealander living in Australia, told the AFP news agency: “If, as the DNA suggests, the kiwi is related to the emu, then both shared a common ancestor that could fly.

“It means they were little and volant and that they flew to New Zealand.”

Worthy added that while it was not uncommon for bird species to “jump” from Australia to New Zealand, the research was not conclusive.

“We need to find wing bones to put the theory beyond all doubt,” he said.

The findings have been published by the Society of Avian Paleontology and Evolution.