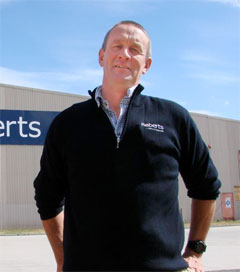 A wave of New Zealand farmers are being wooed to Tasmania’s dairy scene, where milk production is rising helped by a record price from processor Fonterra of $6.64 a kilogram for milk solids this month. The growth is being backed by rural trader, Roberts Limited, which has just appointed its first dairy development manager, New Zealander Ryan Ashby (pictured).

Ashby has taken up the role after 24 years in the industry around north Canterbury, including 16 years milking cows.

“The growth there has been phenomenal in the last four or five years,” Ashby said.

“It’s mainly on the back of water. Anyone with good reliable water has chased the dairy return.

“The land price over here is a lot cheaper than what it is in New Zealand; going forward, probably half of what it should be.