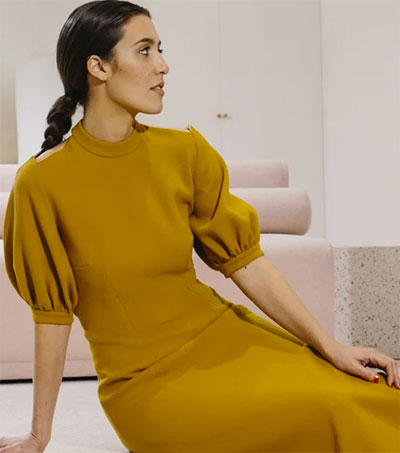 New Zealand-born fashion designer Emilia Wickstead, a favourite of Meghan Markle and the Duchess of Cambridge, is showing a collaboration with MATCHESFASHION.COM at Fashion Week Australia on 15 May. She talks to the Sydney Morning Herald about what it’s like to dress the royal trendsetters.

The proverbial sun has been shining on the 35-year-old, who after less than 10 years in business has dressed a first lady, a duchess and, lately, the world’s most famous bride-to-be.

After shooting to celebrity status in Britain for regularly dressing the Duchess of Cambridge, Wickstead has grown her team. Still, she remains incredibly hands-on in every detail of the business, even managing its Instagram account.

“Yes, that’s me. It’s a way in which you can showcase your best own advertisement. What’s in your mind. Being a creative person that resonates in anything you do,” Wickstead says.

As far as advertisements go, they don’t come bigger than this weekend’s royal wedding. And while the latest speculation about Markle’s dress – or dresses – has centred on other designers, including Australian expats Ralph & Russo, there is a high chance that Wickstead’s dresses will have some presence at the event.

She politely declines to discuss dressing the royals in great detail but concedes she had advance knowledge of the black suit Markle wore to the Anzac Day service at Westminster Abbey.

Wickstead says that having the world’s most influential women wear her designs is “such a pat on the back”.

“When people say, ‘What are your biggest achievements [professionally]?’ … When people are in the spotlight doing inspirational things or leaders who are wearing your clothing. They are thinking what it stands for,” she says.

Original article by Melissa Singer, The Sydney Morning Herald, May 11, 2018.

New Zealand-born chef Analiese Gregory, 36, tells the Financial Times “why she turned her back on the world’s chicest restaurants to set up home – and a kitchen – at the…